Gougane Barra is famous for many reasons. The source of the mighty river Lee is found here as you ascend the slopes of its impressive hills. The cool green calm forests here cocoon you in a gentle embrace as the grind of life falls away. It is here that Saint Patrick is said to have banished the snakes from Ireland, one so large it gouged the valley of Gougane itself.

One of the most beautiful, ancient churches in the land sits on the lake not far from where the sinister serpent was banished. It now has a far more benign function, purveying blessings on newlyweds and curious travellers from near and far. The forest here was originally farm land which was purchased by the State in the late 1930’s. It has since been reforested with over 20 different types of trees, predominantly coniferous.

A very famous couple lived in the area in the early to mid part of the 1900’s. The husband, Tim Buckley was known as a great storyteller and tailor. He was 9 years younger than his wife, Ansty. He had a crippled leg from childhood so as they aged, visitors became increasingly important to them. His vivid tales drew people from near and far, including a journalist called Eric Cross who regularly visited the couple in the 1930’s. Unbeknownst to them, Cross wrote a series of articles on their lives which later became a book and a play. The book was banned by the Censorship board in 1942 for supposed indecent subject matter. A huge furore played out over the book and was even brought to Senate!

Gougane Barra also has the auspicious honour of the loveliest latrine in Ireland, and with a thatched roof to boot!
It is no wonder that saints and scholars from all over the world have ventured to this magical place. Nowadays couples exchange vows in its natural splendour. 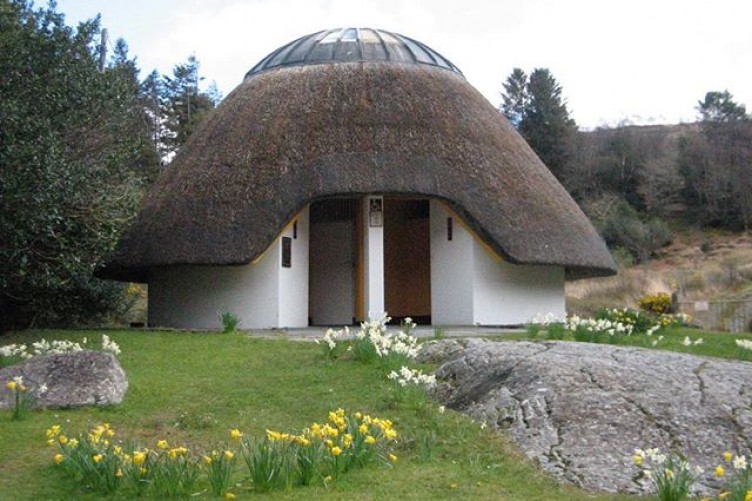